PepsiCo’s former CEO Indra Nooyi’s an inspiration to working women across the globe. However, behind every successful human, there is great parenting; and Nooyi’s case is no different. Here’s an excerpt from her 2015 New York speech at the “Women in Leadership Panel,” that conveys a lesson on parenting we can learn from Nooyi’s mother.

Indra Nooyi shared, “Every night at the dinner table, my mother would ask us to write a speech about what we would do if we were president, chief minister, or prime minister—every day would be a different world leader she’d ask us to play. At the end of dinner, we had to give the speech, and she had to decide who she was going to vote for.”

Nooyi recalls that this daily ritual happened when she and her elder sister were all of 8 to 11 years old.

Indra Nooyi admitted that her mother’s daily practice built their confidence and even when the sisters entered adolescence and find this activity a little off-wired, they still appreciated it all together.

“Even though my mother didn’t work and didn’t go to college, she lived a life vicariously through her daughters. So, she gave us that confidence to be whatever we wanted to be. That was an incredibly formative experience in my youth.”

The one lesson Indra Nooyi’s speech tells us all is that parents play an invincible role in the formative years of children. They are the ones who set the stage for being successful in life later on, right while the children are in their growing years.

Most of the parents prepare their wards for ‘Show n Tell’ competitions, Open House, etc at the nick of time. Whereas, they can direct their dinner time talks towards what the children aspire to be, do role play with them or as Nooyi’s mother, just ask them to prepare a speech and jot down ideas on how they are going to change the world around them if they are the Prime Minister, the Chief Minister or the Boss of the House. 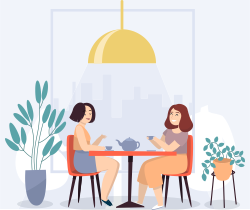 Did you know Green Peas can help you control Blood Sugar Levels?

Mastering Communication Skills – The skill which is often Miscomprehended!

Do You Really Need to Exercise Control on your Birthday-Night Dinner?